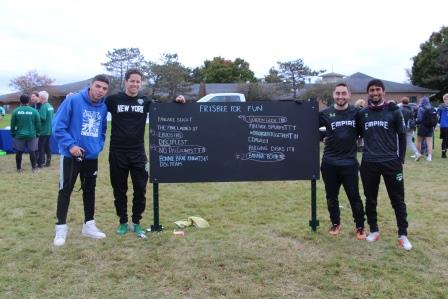 Former Ultimate Frisbee Pro, Jacob Price, is lending his expertise and experience to help Bonnie Brae’s Frisbee for Fun Tournament raise funds so that Bonnie Brae youth can attend summer camp. On November 3rd, he and some of his Pro-teammates will be on site at the Bonnie Brae campus to referee and assist in running this year’s tournament.

As a member of the Frisbee for Fun Committee, Jake is working to grow the tournament in both numbers and notoriety. Working with fellow-committee member, Derek Oberleiton, the two have added a “Hat Tournament” component to this year’s event and hope that it will attract additional players. Jacob shared, “In addition to the Team format that has been so successful the last few years, this year’s tournament is going to offer a larger variety of skills and a better format for people to interact with players of varying degrees of skill and varying stages of life.  Frisbee brings together people from all phases of life.  That’s the thing that always brings me back to the Ultimate community. It has always been an incredibly inclusive community that strives to do right by its members.”

Though Jacob grew up in Warren, New Jersey, he didn’t become familiar with Bonnie Brae until last year’s tournament. He was inspired by Bonnie Brae’s mission as well as by the Bonnie Brae youth that participated. “Bonnie Brae does great work with youth, and I like to support good things, especially when it involves Frisbee. I traveled to India for a month where I used Ultimate to help my students establish useful skills that translate well to the real world like conflict resolution and the ability to interact in a healthy, platonic way with the opposite gender. Bonnie Brae represents an obvious way to use Ultimate to give back to a community that could really benefit from it.”

Jake discovered Ultimate Frisbee at a summer camp in middle school and was hooked instantly.  Upon advancing to high school, he was thrilled to learn that there was a varsity Ultimate Frisbee team, which he went on to Captain in his senior year. Jake’s Ultimate resume continued to grow as he went on to play for DEVYL at the youth club championships and then Captain the team at Brown University in both his junior and senior years. He was voted 2nd team All Region both years as well, and played his first season as a professional for the NJ Hammerheads during his junior year of college. He was a founding member of Garden State Ultimate, which is New Jersey’s premier Club Team and played 2 years for the New York Rumble Pro Team, and 2 years for the NY Empire Pro Team. He has also played internationally for Team Uruguay at the Pan American Championships and with the Dominican Republic at the World Championships.

He has always been community minded and a believer that the Ultimate Community can use their skills for the greater good.  In addition to the work he did in India, he played globally for Team E.R.I.C. (Early Recognition is Critical) which promotes awareness of cancer symptoms in men.

Now “retired” from the Pro-Ultimate scene, Jake is playing for Philadelphia Patrol, a premier club team out of Philadelphia. It’s not an easy commute from his home in Brooklyn, but one he is more than willing to make for the love of the sport.

Bonnie Brae’s 5th Annual Frisbee for Fun Tournament takes place on Sunday, November 3rd from 1-5pm. Registration and information can be found at https://www.bonnie-brae.org/event/bonnie-brae-frisbee-fun/ or by contacting Maureen Hunt at 908-647-4700, mhunt@bonnie-brae.org