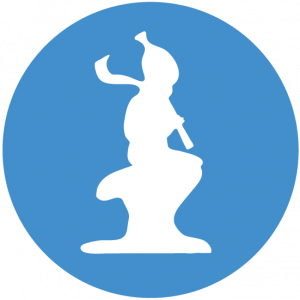 The Piper, Bonnie Brae’s first logo, is an image made in the likeness of Peter Pan, a figure created by Scottish novelist Sir James Barrie, who spends his never-ending childhood having adventures as leader of the lost boys. In our time it was The Bonnie Brae Farm for Boys, and to us, simply “The Farm.” Our logo was the Piper, sitting on his toadstool in silhouette playing his pipe with Art Nouveau iron scrollwork around him.

Bonnie Brae was originally founded as a home for boys who didn’t have a stable home environment. Most of us were from families that had fallen on hard times and couldn’t provide a home for us. We had orphans, wards of the state, kids from the street and some boys sent by the courts. For all of us it was a better, safer and more stable place to be. None of us wanted to go there and very few wanted to leave. Some of us arrived at eight years old and stayed until we graduated high school. For some of us, it was a year or two. For all of us Bonnie Brae was a refuge.

At Bonnie Brae we lived stable disciplined lives. Everybody had a job to do and went to school. We got paid for our work so we had spending money. We learned how to live in the world from the staff and from our peers. Whatever we thought of each other on The Farm when off The Farm we were a brotherhood. We belonged and belonging is perhaps the most important thing to teenage boys. We came to identify ourselves as Bonnie Brae Boys and 60 years later a lot of us still do.

In the 1950’s the world was modern and modernizing. To an eleven year old the Piper with his toadstool and scrollwork was clearly dated. Art Nouveau Scrollwork was definitely old fashioned. The Piper didn’t mean a lot to most of us then. We didn’t have logo gear to wear. Mostly he sat over our sign on Valley Road and over a fireplace in one of the cottages.

“I have no idea when The Piper first adorned our sign. I do know that for hundreds and hundreds of us – the Alums of Bonnie Brae Farm for Boys – the sight of the Piper reminds us of where we came from and perhaps the best of what made us who we are today.” ~A Bonnie Brae Alumnus

Our Matinee Theatre Group 2023 Spring Shows are Now Announced! Join us this spring for #MoulinRouge and #Wicked!… https://t.co/W10WeSgYRs
Since 1916, Bonnie Brae has provided residential treatment and education services to boys ages 12 – 21 who have exp… https://t.co/lRgUXmNl5H
The best way for our counselors to learn how to teach our youth new skills is by them going through the process the… https://t.co/nFxZJ2x2UT